On Monday March 31st one of our pregnant does gave birth to a very small premature kid. The buckling was having trouble right from the get go. Very little colostrum that we could tell and not nursing at all. Ashley called the team over at Flamingo Gardens and between them and their examination of the kid and mother, the best chance for the baby would be the bottle.

At the beginning their was tube feeding and very reluctant bottle feeding.  We got the kid to the vet who gave him all the necessary medication and a thorough exam.  Prognosis: baby goat was in good health but weak and small.

The next two weeks were made up of bottle feeding round the clock and hanging out at Flamingo Gardens during the day.  Mike and Laura are incredible people who lead an amazing team of people. All of their combined efforts undoubtedly saved the kid.

The Story of Wiggles The Goat

We started with a enclosed pen completely covered in vegetation. Dense vegetation. It took a crew of five guys an entire day to remove the tree limbs, plants, and assorted vines that had engulfed our potential animal pen.  Once cleared we enlisted the help of our good friend Ashley.  Without whose help we could not have accomplished our goal. When it comes to animals and their well being, she is a wealth of information and action.

She managed the renovation of our pen from the rewiring and securing of the enclosure to the segmentation for the different animals we were planning. Sorry, I forgot to mention Ashley is one of the animal rescue specialist/zookeeper/jack of all the animal trades at Flamingo Gardens. So if all that wasn't enough, next she secured our chicks, raised them over at the "The Gardens" and brought them back when they were ready to be in the coop (which she set up with waterers and feeders).

A Very Special Thank You To Ashley!

It still doesn't end there, you can read on about "Wiggles" and how Ashley, Mike, and Laura saved him and made him a TV celebrity along with Sydney the deer .

It is really fun to have animals, hard work but fun, especially when you have people around who care about them and above all…know what their doing!

Wiggles gets better day by day.  Fast forward a couple of weeks and a funny thing happens in the suburbs of Ft. Lauderdale. Unbeknowns to the ​

Read on…its not over yet.  So about a week goes by after the chickens arrive and I get a text.  We have goats at the farm. Ashley has wrangled five goats out of the heard at Cowboy Dennis's ranch. 4 does and one buck. By the time I got there she had already set the pen up with water troughs and food buckets, got the hay and the goat chow. 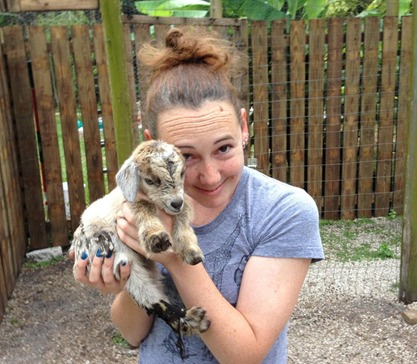 WIggles at a few hours old with Ashley

Wiggles is back at the farm doing very well hanging out with the other goats learning how to be a goat.  He spent his first few weeks hanging with a couple of big dogs, so he came back thinking he was a dog. We introduced him back in slowly. At first just with with Rocksy our other kid. I think it came to him quite suddenly after Rocksy (who is half his age and size and weight) knocked him on his ass with one hit. Rocksy just wanted to play. Wiggles figured it out quick and within a couple of minutes tried to headbutt Rocksy but missed. He got better. They are now quite good together.

Wiggles is now running around with the other goats during the day, climbing and jumping and generally acting like  goat. He is getting bigger and stronger so we are hopeful for his long term health.

See more pictures of Wiggles and Rocksy on the Gallery page

owner, a fence is accidentally knocked down and a very small Muntjac deer escapes and is brought to Flamingo Gardens. And so the story goes on….